(Receive at your home) 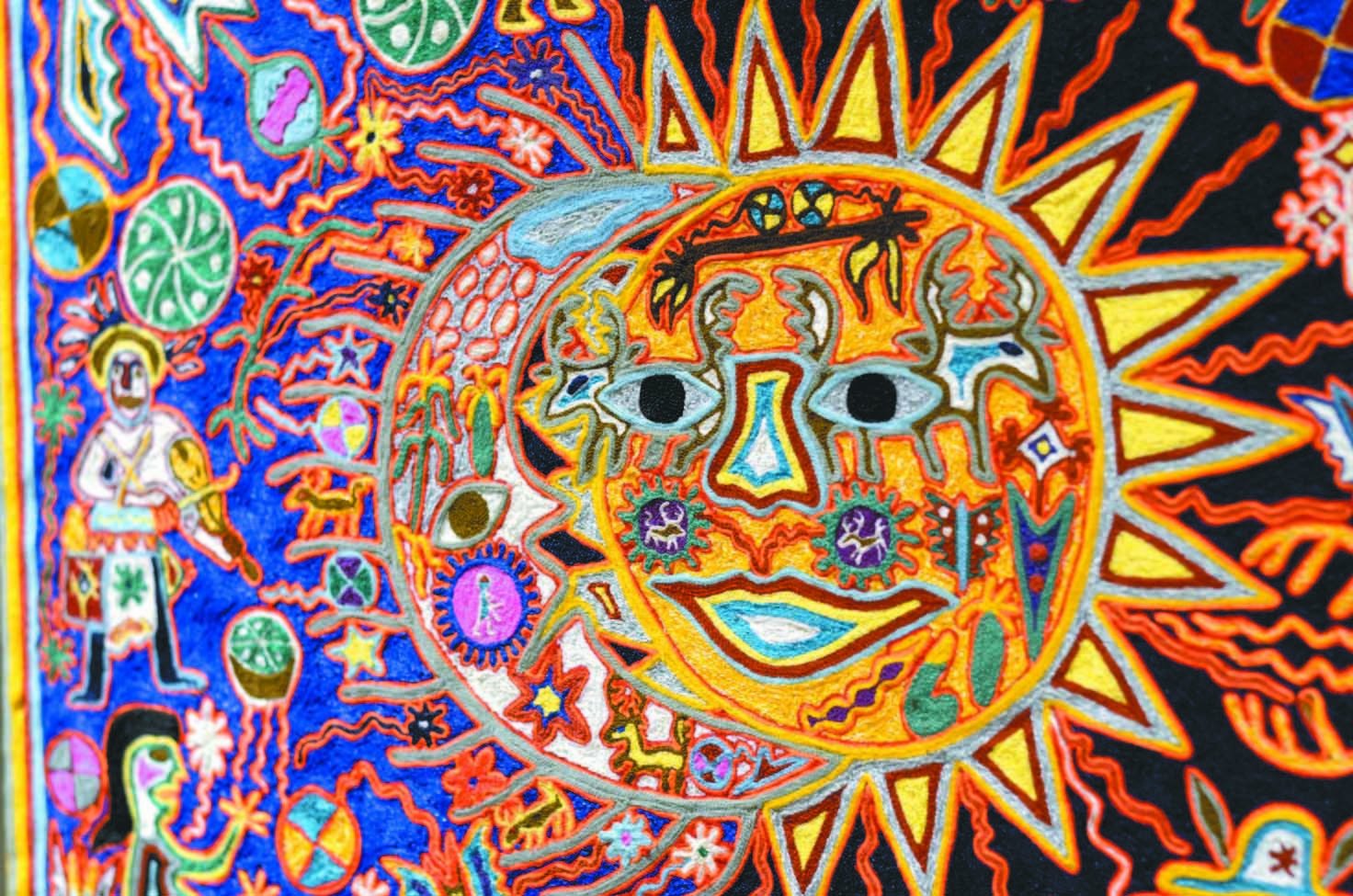 In Mexican Craft Gifts, one of the most important aspects is the experience with the original peoples of Mexico, one of the valuartes is the appreciation of popular arts and Mexican culture with its customs and traditions. One of the most appreciated is undoubtedly the Huichol Art or wixarika. We have the highest esteem and respect for this Huichol (wixarika) ethnic group and we believe they deserve to be valued and respected, that is why we are honored to bring you their art so that you know and appreciate it. Just as we are interested in spreading its culture, traditions and customs, that is why we try to contribute to its being known and appreciated by the whole world.

Expression of the Popular Art of the Huicholes (Wirraritari): The Huicholes are one of the ethnic groups that has managed to remain "pure" since the Spanish conquest. They refer to themselves as "Wirrárrica" ​​or "Wirraritari" (plural). It is not known if the word "huicholes" is a variation of "Wirrárrica" ​​or "Wixarika". They are found in the mountains of the Sierra Madre Occidental, north of Jalisco and Nayarit; the mountains are inhabited by a mystic Huichol culture; in which constantly enigmatic worlds are created whose recurring protagonists are moons, suns, trees, labyrinths, spirals, mountains and cosmic oceans that tirelessly appear expressed in the art, religion and customs of the Huicholes, a people of Huichol artists who It has maintained undamaged external influence through the centuries come from the central West of Mexico, where the Huichol live in retired places of the Sierra Madre Occidental in the States of Nayarit and Jalisco.

Initiation of ritual art.- For belonging to the specific religious practice of an indigenous group, the Huichol has dimensions different from those of contemporary art that we usually find in museums and galleries. The Huichol world, is divided into three universes: that of mythology, the Huichol maintains that life began in the ocean; the one referring to corn, where everyday life and Huichol traditions are developed and the one that has to do with mysticism, which reveals the Huichol world and the Huichol art of their rituals that distinguish them and give them identity as a Huichol community.

Although the origin of this fascinating Huichol ethnic group is uncertain, what is indisputable is that during the period of the Conquest, many survivors of various indigenous peoples, mainly the Huichol, fled into the Sierra Madre Occidental to escape the wake of destruction left by the Spanish troops.

Huichol Art is a form of writing, because through the creations, the Huicholes tell us their stories and myths. In each Huichol craft they leave a piece of their life. Currently, it can be said that there is no other ethnic group in Mexico that conserves its beliefs, cults and traditions as deeply as the Huicholes. Ancestors that are born:

Huichol Art has an enigmatic beauty that takes us through mythical paths and brings us closer to the beginning of time in the Huichol Culture, but it is not only about Huichol myths drawn by the Huichol artists who draw them in yarn or thread, in religion of the Huicholes, the world exists thanks to the visionary experience of the Huichol initiate and his effort to obtain the "nierika" or "gift of seeing". In this way for the Huichol, the Huichol artistic creation has a cosmogonic dimension.

The Huicholes are one of the ethnic groups that has managed to remain pure since the time of the conquest. They refer to themselves as Wirrarica or Wirraritari

For the Huichol, the world possesses a sacred dimension to which the mara'akame (shaman) penetrates through sleep, establishing a link between the world of the gods and the profane. Customs: If the Huichol has become ill due to a spell, the mara'akame must "clean" the patient with feathers while spraying tobacco smoke all over his body to then suck with the mouth the object that causes the disease; When the patient has lost the kupúri (a part of the soul of the Huichol that is located on the top of the head) the mara'akame must go in his search to put it back in its place, but when it has been stolen by a sorcerer, the mara'akame huichol must confront him to recover it.

It is due to the importance of the sacred Huichol world and its intrinsic relationship with the Huichol way of life, which in their art are always expressed, hundreds of stories that tell the mythology and cosmogony of this fascinating culture. All those Huichol crafts that are not oriented for commercial purposes, are created to narrate the different religious experiences of the Huichol in each of its authors, becoming fantastic pieces of beautiful colors and unimaginable figures that can be conceived only in the mind of the artist huichol.

The ancestral legend: The Huichol legend tells how, at the beginning of time, there was no other light in the world but that of the Moon, this being a great inconvenience for man. The elders and those who possessed the knowledge then gathered to discuss how to bring more light to the world, they prayed to the moon to send their only child, a lame and one-eyed child. At first the Moon objected, but in the end he gave his consent. Then, they dressed the boy with ceremonial clothes, which consisted of huaraches, (sandals) feathers, and backpacks to store tobacco; Then they gave him a bow and arrows and painted his face, and then he threw it into an oven, where the fire consumed him completely. However, the child was resurrected and ran under the earth, and it amazed everyone: five days later, the Sun appeared. When the Sun spread its light on the earth, all nocturnal animals (jaguars and mountain lions, coyotes , foxes and snakes) got very upset and shot their arrows at the star of the day.

The heat and rays of the Sun were intense and blinded the animals of the night, forcing them to hide in dark caves, puddles and trees; If it had not been for the squirrel and the "pitorreal", the Sun could not have completed its first journey through the sky. These were the only two animals that defended the Sun; they would have preferred to give their lives than to allow the Sun to die, and in the evening they left a little "tesguino" in sight so that the Sun could pass. The jaguars and wolves killed the squirrel and the pitorreal at the end, but, even to this day, the Huicholes make offerings to these heroes and call the squirrel "Father". Productive Activities: Apart from the sale of their crafts, the main productive activities of the Huicholes are basically those necessary for their sustenance: hunting, fishing and agriculture. Its main crops are corn, pumpkin, zucchini, amaranth, beans and chili. They still plow the land using wooden plows, and when the terrain permits, they use a yoke of oxen. All agricultural lands are communal property. There is a temporary migration between the Huicholes:

Their religious, political and economic life is organized in such a way that they can migrate from one place to another and then return to their places of origin. There are Huicholes settlements in Tepic, Calvillo, Fresnillo and Guadalajara; although it is not clear if these settlements are temporary or permanent.

Social Organization The Huicholes are governed by a caste of shamans, warriors and mysterious sorcerers who wage epic battles in the supernatural plane, in order to solve problems and worldly or divine matters. The governor is known as Mara'akame "he who knows". This caste prepares new shamans or Matewame, "he who will know", to keep the lineage and knowledge alive. The Huichol system of current traditional authority is a mixture of pre-Hispanic group organization with customs imposed by the missionaries. Among these authorities are the "kawiteros" (elders), who have fulfilled their civil and religious obligations to the community, apart from the fact that they have knowledge of the group's traditions, that is why they are the most respected and revered of the community. The kawitero is responsible for electing the members of the traditional government, which is renewed each year in a ceremony where wood rods are exchanged "rods of power". This ceremony is held in January of each year. The government consists of a series of officers headed by the "taotani" (governor), whose main function is judicial, apart from playing an intricate role in making each and every decision.

Other officials are the judge and the mayor, the lieutenants or delegates and the "topiles", whose main function is as messengers or policemen and who are under the orders of a captain. There are also other religious positions assigned to each temple or "tupika". When buying Huichol items, they not only acquire a true work of art full of magic and mysticism, but allow the members of these communities to live with their own income. Nierika, offers a wide selection of Huichol art pieces. The Huichols are one of the ethnic groups that has managed to remain "pure" since the Spanish conquest.

If you want to acquire Huichol art you can enter
https://regalos-artesanales.com/en/unique-gifts/categories/huichol-art

We ship to Mexico, United States and the World

Unique and unrepeatable pieces of collection

SECURITY IN YOUR PURCHASE

Pay with Credit Card or Transfer

Discover the Art and Culture of Mexico through his works. Authentic handcrafts made by mexican artists; magic and color in every detail.